Breastfeeding, To Supplement, or Not?

I remember it well.. the clueless haze that surrounded me as a soon-to-be-first-time mom. I was pretty young too, with no mother as a source of support, I read everything I could get my hands on to prepare for my new arrival. 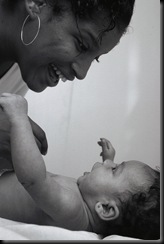 I remember feeling the conviction of giving my baby the absolute best I could offer and after reading countless material, that conclusion was to supplement breastfeeding with formula. With that winning combination, could it be wrong? ‘Cause you see, half the material I read from came from my doctor’s office, sponsored by Similac (or something like that).

When my sister asked me of my plans of feeding my coming baby, I told her confidently I was going to “supplement”. I remember it clearly…she cocked her head and looked at me wonderingly and said, “No, you want to breastfeed only.” I shrugged my shoulders, still enshrouded in the bliss of cluelessness. Now my sister and I are not close, mind you, but I have to say it was one of the best things she’s said, although she never gave reasons why I wanted to “breastfeed only”.

So baby arrives and is so precious, I don’t give formula a single thought. For whatever reason, I protested the nurses at the birth center pushing formula on me. I just knew instinctively it wasn’t right, as soon as I put that baby at my breast.

After two weeks of frustration, breastfeeding was a both a joy and a breeze.  I was immensely protective of this bond between my daughter and I as I nursed well beyond the recommended six months, exclusively at that. I nursed my daughter exclusively for almost a year. She had no interest in food and was hefty to boot.
But of course,  like every breastfeeding momma, I had naysayers. Opinionated, advice-giving, naysayers that insisted that I was nursing way too long and wanted to “babysit” my child, occasionally just to wean her. Mind you, I was young, while I didn’t vocally tell these people to “kiss my breastfeeding a**””, I nursed my child in defiance.

I didn’t. I weaned my firstborn at 23 months in anticipation of returning to college…when we were good and ready.

“Babies who were exclusively breastfed had less acute respiratory infections, less ear infections, less thrush, fewer episodes of digestive infections, and fewer hospitalizations. This study included 926 infants over the course of 12 months. An interesting finding was that the protective effect of exclusive breastfeeding for six months resulted in less infections during the entire 12 months. Previous studies have shown less infections in breastfed babies; but many of these studies occurred in populations with poor medical care, and babies who were prone to more infections because of low standards of living. This study was conducted in a population of infants with high health standards and adequate medical care.

I tell you, I cannot nod my head hard enough in agreement with this research. My children have been exposed to the chicken pox, well after they have stopped nursing…several times and have NEVER gotten it.  Out of 7 babies, I only experienced ONE incident of an ear infection. If you’re a new mom looking into the benefits of breastfeeding, let me encourage you to forget supplemental feeding as a choice and choose to nurse exclusively, as extensively as you can!

Seventeen years after being inducted into the community of breastfeeding moms, my 16 year-old, who will turn 17 in a week’s time, is a healthy, happy, thriving, successful teen who is enjoying her high school years.  Thank God, I never supplemented my breast milk  as I was deceived as it being the best of both worlds.