Conquering the World “Two Boobs At a Time”

Dennis Lewis sent out this email in response to the continued, YES continued, fuss about the Breast Milk Baby Doll. In an email titled “World Domination…Two Boobs At A Time” He states:


Enough is enough...
Over the last couple of weeks we've answered over a thousand emails from people all over the country.  Lots were from supporters, and yes, quite a few were negative - from people who feel threatened by something so natural as breastfeeding.
Good Morning America did a great report (thanks Mary) and we've been talking with reporters from TV, radio, newpapers and bloggers from across the US, UK and Australia.
However, the only moment I've honestly felt insulted was when Bill O'Reilly trashed our beautiful dolls on nationwide TV without even bothering to pick up the phone and ask our side of the story -  and their slogan is "Fair and Unbalanced"?  So here's our response (please watch till the end): 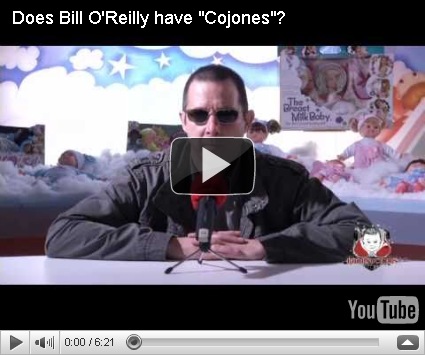 I can almost understand how some uninformed people have been duped into believing that breastfeeding is something to be hidden, but a powerful organization like Fox News?

Shame on you.
We want to teach them a lesson, and we need your help!

Let's face it.  Berjuan Toys is a tiny little speck of a company and Fox News is a monstrously big media machine.  But we're not about to stand down.
We genuinely believe in the product we've built and the purpose it serves.  Our dolls harm no one.Furthermore, breastfeeding is an important issue and we believe it's time America wakes up and shakes off all these stupid prejudices and backward ideas.
It's time for a few proud BOOBSUCKERS :-) (if you've watched the video you'll get the joke) to stand up and make ourselves heard.

Bill O'Reilly may not accept our challenge (we actually don't believe he's got what it takes), but we can at least make him look as stupid as possible.
Over the next few days I may ask you for a couple of favors, but for the moment, we need to make this video go viral.  Please, watch the video. Send it to your friends.  Send it to your enemies.  Post it to websites, blogs and facebook profiles.If any of you belong to breastfeeding groups or organizations, contact me about working together to get the word out.

On behalf of our six little innocent baby dolls, I thank you SO much for your support.
Now lets ROCK and ROLL.