Okay moms, parents help me out here. The other day I was watching Cartoon Network with my children. I saw a TV ad for Capri Sun drinks which went something like this:

Two boys were arm wrestling. One of the boys was drinking a Capri Sun pouch while arm wrestling and emptied it.  When it was gone, he blew it up (like a balloon) and placed it on the table. When he wrestled the other boys arm down, both hands deflated the pouch. He (the boy who drank the Capri Sun) immediately received  massively muscled arms. Now, I wouldn’t think anything of it, except at the end of the commercial the name “Disrespectoids” came up.

Now my jaw dropped as images of needles dripping with steroids came to mind. I was floored at the VERY close relation between the massive muscles and the “oids” in the term.

Now let me expound further, I do not like cartoons, and Cartoon Network isn’t something my children watch. I decided to sit with them and watch Garfield to see if it was something that didn’t cross any boundaries with me. (I can’t stand cartoons that glorify body  noises, kids disrespecting their parents or any thing that encourages bad behavior) My children are allowed to watch SOME shows outside of PBS. IN any event, I went online to see if I could find a video of what I just saw to no avail. However, apparently there are games and a show (I think??) about “Disrespectoids” that comes with the tagline of  “Respect The Pouch”.

I asked my children if they’ve ever seen a show or ad about it. They said they haven’t. So I’m asking you moms and dads, if you’ve seen the ad I’m referring to or if you know of these shows. I would love for you to share your input and thoughts.

I found a YouTube video that shows some of the Disrespectoids ads, but not the one I saw on TV….I must say, I found it disturbing at the least and threatening at the most. Watch the video and tell me what you think. 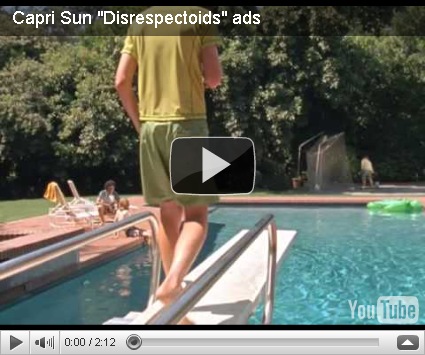