12 Things You Didn’t Know About Salt 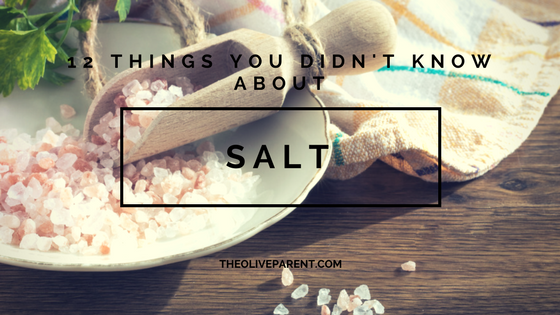 In the 1900’s a shift in cultural values was all that took to depreciate the tremendous value of nature-made salt. Machine-production was simply better than hand-made was the mindset in those days. Refining salt further cheapened the supply and rendered salt a dirty word to be avoided for the sake of health. Today, perceptions of salt, influenced by refined salt, is a far cry from the days of yore. Salt making was an art and craft of local artisans positioned globally. It was used to preserve food by brining and curing. The possession of salt was so highly prized, economies were based on it and whoever controlled salt-making had the upper hand. It was a symbol of power and a means to achieve it. Today, the organic food movement has revived the forgotten health food that is salt. Today, we are re-discovering salt in a way our ancestors couldn’t appreciate. With our nutrient-deficient soil and foods, salt, unrefined, can fulfill those missing minerals and trace elements we can’t get by eating whole, organic foods. We can maximize our nutritional standpoint, by fermenting with wholesome salt. It is only now we see the wisdom of the use of salt by our ancestors, as we (the organic movement) can appreciate the old time preservation of food with salt. Here are twelve facts about salt you probably didn’t know…

1. Table Salt and Unrefined (raw) Salt are not the same.

Comparing table salt and unrefined salt is comparing apples and oranges. Think of it as comparing a multivitamin supplement (table salt) to whole foods (raw salt). Raw salt is minimally processed and contains their full mineral profile. Often times both qualities of salt get lumped into the same definition. They should be considered separate and unequal.

Salt contains sodium chloride and trace elements to balance it out, in raw form (full mineral profile). Our bodies use the sodium and minerals in salt for many essential functions in the body, such as fluid regulation, nerve/muscle function, and digestion.

3. Salt is the only mineral we eat.

In comparison, we consume vegetation, animals and various forms of sea life.

4. Salt is the only universal ingredient.

While it is the only universal ingredient, it is the most varied. Nature-made salts come from all regions and reflect the uniqueness of a specific area.

7. Out of a million ton of refined salt that is manufactured, only 6% is used in food.

The rest is used in chemical manufacturing processes from plastics to medicine.2

Our blood, plasma, extracellular fluid and lymphatic fluid are salted.1
Seawater contains every element in the earth’s crust.1

10. Salt and water are a harmonic duo that balances each other out.

We use sodium in salt to regulate how the water operates and we use water to balance the concentration of salt in the body.1

12. We cannot live without salt.

You can become a vegetarian and live without meat. You can omit grains and dairy in your diet and be just fine, but salt is an essential mineral our body cannot exist without.

Tips for Choosing the Right Salt

Choosing the right salt can be confusing! Words like "sea salt" and "natural" do not necessarily mean that the salt is raw. Technically, all salt comes from the sea. The exception being Himalayan Pink salt which is mined from caves that originally was a salt bed of the sea. The word "natural" is not regulated by the FDA so any company selling salt can define "natural" to their own standards which may not agree with yours. Look for salts that explain common sense, natural manufacturing processes on the label.

Table salt, on the other hand, is pristine white (minerals have been stripped).
⧫Their granules are consistent and fine.
⧫They usually will not have any moisture.
⧫They are extremely salty due to their high sodium chloride content.

Contact me if you want to transition to a healthier lifestyle and need product recommendations.

I highly recommend the book “Salted”, the inspiration behind this article. It is well written and a captivating read that includes recipes and just about every aspect of salt that boggles the mind. Speaking spiritually and personally, if salt doesn’t prove that each and every one of us is connected to the earth in a way that is humbling and honorable, I truly don’t know what will. Here’s a quote that I feel aptly reflects the dilemma of today’s refined salt – a “savor” that has been lost.

“Salt is good: but if the salt have lost his savour, wherewith shall it be seasoned?” - Luke 14:34