My most favorite store to shop at is Trader Joe’s. Not only do they have interesting and healthy items and foods, they are reasonably priced. Most items are priced lower than Dominick's (Safeway) and Jewel (Osco). There was one particular item I’ve seen on every shopping trip, but never bought. I was attracted to the Himalayan Pink Salt with a grinder, just because the salt was pink. I finally bought the salt about a month ago and wanted to investigate this fascinating salt a bit more. What I’ve discovered was nothing short a new mindset towards salt.

When people in generally are referring to salt, they speak of refined salt, also known as table salt. Refined salt is the unnatural result of salt that has been processed by facilities and factories.


Refined table salts start innocently enough: they are collected from sea water (often from not-so-pristine locales such as the South San Francisco Bay) or harvested from underground salt mines. After water-flushing, table salt manufacturers will typically treat and precipitate out unwanted elements using chemical agents such as barium, sulfuric acid and chlorine. The resulting brine is vacuum-evaporated, and anti-caking chemicals such as tricalcium phosphate, silica dioxide, sodium ferrocyanide, ferric ammonium citrate and/or sodium silico-aluminate may be added, depending upon the manufacturer. Many manufacturers also add iodine and dextrose; and many foreign manufacturers add fluoride. The result is ‘purified’ salt—around 99% sodium chloride: A miracle of industrial modification.(1,2) – The Truth About Whole Salt by Dr. Casey Adams

Refined salt consist of mainly one mineral, sodium chloride. Iodine may be added to refined salt.  What we end up with is a salt that has been stripped of what is considered “impurities”  and left with sodium chloride.


With the advent of industrial development, natural salt was “chemically cleaned” and reduced to the combination of sodium and chloride. Essential minerals and trace elements were removed as impurities. However, sodium chloride is an unnatural, isolated, unwholesome substance having nothing in common with salt. Similar to white, refined sugar, salt, once regarded as white gold, was converted into white poison. However, there is a higher reason for salt having been endowed with all the natural elements found in our bodies. Sodium chloride is an aggressive substance, which biochemically, is perpetually seeking an equalizing counterpart so that the body’s pH can always remain neutral. Sodium chloride needs its natural counterpart in order for it to produce its effect. – WaterandSalt.ca

Without it's natural counterparts like magnesium, potassium, calcium and more, the result is that manufactured salt consumed in large quantities are unhealthy at best and dangerous at worst.


The Truth About Salt

The truth is we need salt to exist and function.


Even the simplest processes in our body need salt or its inherent elements in ionized form. For example, it is the task of our nervous system to transmit the stimulation that has been recorded via sensory input to our brain, which in return passes this information back to our muscles in order for us to react to the respective stimuli." – WaterandSalt.ca
Despite what we have been led to believe, salt is equally as important to the human body as water. As long as you are drinking enough water, salt is absolutely essential for the body to generate hydroelectric energy, maintain good blood chemistry, balance the correct amount of water in our blood and cells, aid digestion and allow our nervous system and muscles to function normally. Without salt you would not be able to think nor act. – DetoxYourWorld.com

The type of salt that gives that balance we need is unrefined, natural salt.

Mike Adams at NaturalNews has some helpful advice on choosing a natural salt.


You've probably noticed a lot of processed salt companies now claiming to offer "sea salt." The truth is, virtually all salt is sea salt because it all came from the sea at one time or another in the Earth's history.
The term "sea salt" is essentially meaningless. White processed salt can still be called "sea salt" even though it is devoid of full-spectrum sea minerals.
The way to tell if your salt is really full-spectrum salt is to look at the color. If it's pure white, it's not full-spectrum. White salt is just like white sugar: It's missing the key supporting minerals and nutrients your body needs.
Full-spectrum salt always has a non-white color. Celtic Sea Salt, for example (which is really good salt) has a brownish sandy color. Our Pink Himalayan salt is a sort of sandy rose color. All the truly natural full-spectrum salts are sandy or brownish in color. – Mike Adams

The fact of the matter is that unrefined salt gives you the minerals along with the sodium chloride to help counteract and balance it. Himalayan Pink Salt is said to be the best of all unrefined salts. It contains 84 minerals and trace elements. You can use it as you normally would table salt, in cooking and salting foods. The difference is, you can be confident that  you are providing the minerals your family and you body needs.
My goal now is to eliminate refined salt in foods as much as I can. For example, I no longer purchase salted butter. I  buy unsalted butter and use Himalayan salt if I need to. If anything, it now seems as if refined salt  has invaded everything. I’m constantly checking out nutrition label for sodium, but I have to say I feel so much better knowing the truth about refined salt and replacing it with Pink Salt.

You can get Himalayan Pink Salt at your local Trader Joe’s if you have one. Click on the link to find a store locator. A 4.5 ounce of Pink Salt Crystals costs $1.99. Not bad considering other  other online stores are selling the same amount of crystals for two dollars or more. I have more to share about my experience with Himalayan Pink Salt Crystals. Look for my next post about my experience with Sole, a combination of Pink Salt and Water! 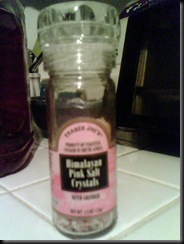