Raw Blue Agave In My Tea!

I finally did it. I tried raw blue Agave. For the longest time, I’ve wondered about the mysterious brown liquid that sweetens like sugar, but isn’t, and told myself that I’d try it some day. That day has arrived.  I truly enjoyed the flavor of it. Having a sweet tooth, I tend to over load on the raw sugar. Yes, even though I’ve eliminated processed sugar out of my diet, I’m still looking for ways to appease that monster of a sweet tooth. Especially so as a tea drinker. I pile on the sugar and when I say pile, it wouldn’t be an exaggeration to assume I mean it literally.

I’ve been using three tablespoons in my tea ( I have a LARGE tea cup, yes, this is kind of an excuse). I’ll only need to add three (regular) table spoons of raw sugar to get it to the level I like it and that is quite a reduction of sugar! I liked the Agave so much that I bought another bottle before using up the first one. 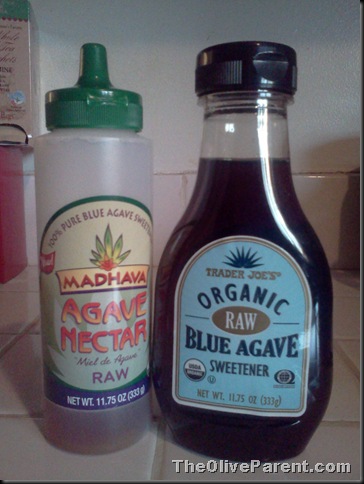 I went looking for some health statistics to share with you all, but disappointingly, I’ve found very few independent articles. Most were from sites selling agave and others were from doctors bashing agave. HOWEVER, thank the good Lord for bloggers, we can count on them to keep it real! This is what http://www.livinghealthymom.com had to say…


Based on my research, I was very hopeful that the agave sweetener may also have some unique health benefits due to the inulin, in addition to being  a low glycemic sweetener.
In understanding how agave is made, there are significant differences in how it is processed and it seems like there should be huge difference in the health benefits. For example, raw honey has many health benefits versus processed honey and I assumed that raw agave would be the same.
However, I was a bit disappointed in not been able to find any supporting evidence to date that there is anything more than “trace” minerals and “trace” amounts of inulin left after processing; even in raw agave. In addition, when baking with agave syrup, the high heat will destroy natural enzymes and pre-biotics like inulin. READ MORE HERE!